Bill Bean is a world-renowned Exorcist / Spiritual Deliverance Minister and is known as The Spiritual Warrior. Bill has helped thousands of people all over America, along with many others in 54 countries. Bill Bean's Spiritual Warfare Deliverance Ministry addresses anything from curses – blocks – attachments – obsession – and oppression to possession by demonic spirits.

He's also an internationally known author, lecturer, and supernatural expert. Bean is currently appearing in episodes of A Haunting, Ghost Nation, Fright Club, along with a 2019 episode of the Holzer Files.

Bill was also featured in the Lifetime Movie Network series, "I was Possessed."
Bill Bean regularly joins George Noory on 'Coast to Coast AM, and has also appeared in two episodes of the George Noory TV series, Beyond Belief.

Bill appeared on The Glenn Beck Podcast, Friday, August 14, 2020, and has been featured in four articles in the UK's Daily Star newspaper as well. Bill also appeared in the 2010 SYFY movie The Haunted Boy and has appeared in many TV shows about the paranormal / supernatural. Bill Bean has given over 2000 media interviews and has been covered in many news programs, books, magazines, and newspapers worldwide. Reverend William J. Bean Tales From An Exorcist" is fresh, shocking, and is a stunning read, a masterpiece that asks readers to reflect on the good and evil that enters their lives. 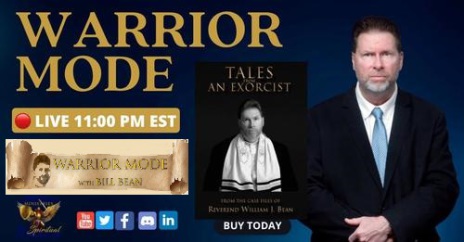 Warrior Mode is part show, part church service. We provide you with prayer, teaching, news stories, spiritual deliverance, and covenant renewal. We also have a long prayer list that Bill reads, along with 7 Declarations and Ten Steps to Victory!

Tune in and become a part of the Warrior Mode family.

Darren Marlar  has a top ten rated show in  "Fireside Chats"
He read an entire chapter from my new book Tales From An Exorcist.
It aired Friday evening December 23rd, and It's Volume 21 in the menu on his site.
He narrated a story before mine and began reading my chapter at the 34:47 mark.